The Public Fund Civil Initiative of Internet Policy (CIIP) held monitoring of Internet during the parliamentarian elections from November 20, 2007 to January 10, 2008. Under this project access to the national Internet resources both at the national level and outside the Kyrgyz Republic was analyzed.

Background of the project implementation

During the project implementation Internet resources remained an important source of information.  After appearance in “forums and chats” of criticizing articles and utterances against the acting politicians, the National Security Agency has distributed a request to all informational services to provide all IP addresses of “forums and chats” users.  Therefore the information agencies turned to our organization for assistance how to lawfully refuse to provide IP addresses of Internet users.  The lawyers of our organization have prepared legal grounds for refusal to provide IP addresses to the national security agencies.  Based on the developed legal rationale the information services denied the request of the related law enforcement bodies.  However, the law enforcement bodies have developed a draft normative act that would allow to make it compulsory to introduce the information sites over IP addresses of users.  The public fund has held many consultations with government representatives explaining the negative consequences of change of the legislation with regard to Internet resources.  I.e. such change could constrain development of Internet which during the parliamentary elections was the main source of information.

As a result of consultations it was agreed to arrange joint activity of CIIP and other NGO with the government to consider issues of Internet regulation taking into account the international standards of regulation of Internet.  Currently the government initiative to regulate Internet is suspended.The Government made a new proposal which is to introduce control over the mobile communication users and censorship in Internet.  Our organization formed working groups to assess these normative acts.  The working groups included telecommunications operators, government representatives and representatives of non-government organizations.  For these purposes our organization continues discussing the methods and ways of information struggle against such initiatives.

In November the National Security Agency has held meetings with managers of communication operators, including Internet providers to discuss issues of introduction of filtration.  Communication operators have denied such request.  Similar meetings were held with heads of information agencies which have forums and chats.

Description of the implemented monitoring of Internet

The project activity was held in two main directions:

Technical survey has been the basis of activity throughout the project.

CIIP developed a list of pubic and political sites which are regularly imposed to various attacks and blockings, as well as the sites prone to blockings.  Such sites include not only the sites in the .kg zone, but also those on servers of other countries containing the important information for citizens of our country.

The list of resources to be tested was made based on the following principle:

Monitoring of the national Internet was held using Internet services available for every common user.  In course of monitoring the above mentioned 8 Internet providers were selected, since they are national providers, having own channels to access the global network Internet.  For the purpose of survey we connected one computer to each ISP separately. This equipment was set in such a way that continuously (every equal time intervals) automatic requests were sent to certain lists of sites which could be blocked or access to which could be limited (whether artificially or naturally the channel is loaded).

Local technical specialists have studied the possibility of filtration and general practice using the international developments in this area.  In order to obtain a reliable result by the project participants the following was done:

International technical experts participated in monitoring in order to test the results of monitoring on own special unique equipment.

Analysis and distribution of the results

Based on obtained statistical data the analysis was held the result of which gave answers to questions: by the following criteria:

After identification of the “problematic sites”, i.e. access to which was temporarily suspended for some technical reasons, the work was performed to find out whether it was caused by natural disruptions or by external interference into operation of this site.  Having carefully analyzed the results we received the documented data, containing the information on accessibility of resources, and identified probable reasons of inaccessibility.

Results of the survey

The results of monitoring of Internet during the 2007 elections will be published on CIIP site, and also be provided to international, human rights and political organizations.  Press conference was held for mass media in order to distribute the results to wide public.

General results of the analysis are put into a table, in per cent of accessibility of every checked resource, by time.

This table represents a consolidated report on the survey held for the period from November 20 to December 20, 2007.  The results were included in a consolidated evaluation of reports from all 8 main ISP, making 97 per cent of the Internet services market in Kyrgyzstan.  Special consideration is given to 144 web-sites, both Kyrgyz and foreign one, which content fully or partially represents the information on Kyrgyzstan (political, economic, course of pre-election campaign, results of elections and other).  Seven of the above mentioned websites had problems with access from sub-network of every ISP

The resources included in the table had the following per cent of connection failures:

Percentage of inaccessibility of the problematic resources from November 20 to December 20.

The rest websites experienced recurrent failures with access to them in various time of a day as a result of the following errors:

These errors occurred for several reasons:

The obtained results and implemented survey obviously demonstrate that during the pre-election agitation and elections of President of the KR no intended blocking or difficulties with access to the checked resources were identified.  All problems with getting information and failures to connect to the web-sites occurred because of abundant visits of servers, temporary communication errors and technical collisions of servers of local ISP and foreign providers. 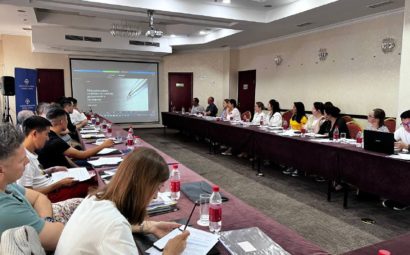